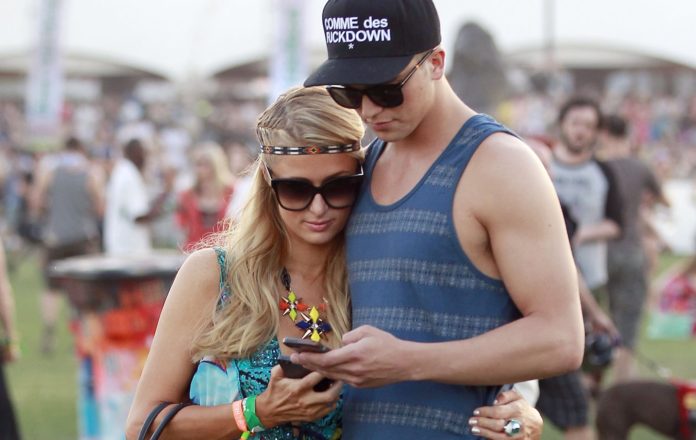 River Viiperi is a Spaniard who although was only born in 1991, has been in a good number of relationships. He dated different women including Paris Hilton. Birthed to a father who is an author, Rafael Canomanuel, and a Finnish model mother, Riitta Viiperi, he has grown into becoming a model himself.

He has 18 when his mother encouraged him to become a model and since then, that has become a career path for him. Before then, he had wanted to become a stockbroker, something his father also did apart from writing.

A Look At The Interesting Love Life of River Viiperi

or someone who is as good-looking as River Viiperi, one would naturally expect that the model would have many women scrambling for his attention and love. More so, often described as being top mature for his age, the River has not found any troubles dating different women including older women.

Sara Sampaio and River Viiperi dated from 2011 to 2012. Sampaio who is also a model was first linked to River in March 2011 when they were still much younger in the modeling business. The Portuguese model was born on 21 July 1991 which makes her slightly older than River who was born on August 4 of the same year.

By September 2012, the relationship came to an end. The 6 time Portuguese Golden Globes would go on to date American singer, Alex DeLeon in 2011, and then she dated French businessman, Oliver Ripley from 2015 to 2020.

Paris Hilton and River Viiperi dated from 2012 to 2014. Hilton has made a name for herself thanks to the many relationships she has kept. She is a media personality, socialite, businesswoman, model, and DJ among other things.

Hilton was born on  17 February 1981, which makes her more than 10 years older than River, but that did not stop them from dating for up to two years before they went their separate ways. She was 32 years old when they dated while he was 21.

There were talks at the time initiated by Paris that they would “soon” be getting married, but that was not to be. Unfortunately, after 2 years, the relationship ended in 2014 after she dumped him for Josh Upshaw. Currently engaged to her partner, Carter Milliken Reum who is a businessman, Paris has been linked to many men in the past including Many Men rapper, 50 Cent, Ronaldo, Leonardo DiCaprio, Kid Rock, and many more.

Nicole Banner and River Viiperi dated from 2014 to 2017. Banner is yet another model, although she is not as popular as the two other women he dated. Her date of birth is also not known. The two dated for three years before they parted ways.

Jessica Goicoechea and River Viiperi dated from 2017 to 2020. River has always been drawn to women who are models, and this is no different with his new catch, Jessica who is a model and actress. She was born on 21 November 1996 in Spain.

After three years of dating, Jessica and River parted ways in a rather controversial manner. The couple was living together in River’s home in Spain police were called on him for assaulting her. It was reported that the police came and saw signs of aggression and that was why they arrested him.

1. River has worked with many big brands

River Delfín Canomanuel Viiperi is a rather big name in modeling. He has worked with many famous brands including Ralph Lauren, Calvin Klein, and H&M. More so, he has had the opportunity of working with photographers including Juergen Teller and Mario Testino.

Interestingly, however, it was his relationship with Paris Hilton that first made him as famous as he is today in the mainstream.

2. He once assaulted a man because of Paris Hilton

In 2012, River was arrested on charges of assault after he got jealous and attacked a man because of Hilton. Interestingly, the attack came after he found Paris and the girlfriend of the man making out. He chose to vent on the man in XS nightclub at the Encore hotel.

3. River has his fashion brand

The fashion model has since started his fashion brand, RV which he has continued to run for close to 10 years. The River V (RV) collection includes tops, hats, and much more.

4. He has an incredible body build- his height and body features

The Ibiza-born model and influencer’s rise as a model cannot be said to be in isolation to the fact that he has a good body build. River Viiperi has a height of 6 feet 2 inches (188.5 CM).

5. River Viiperi seems to be single

Since his relationship came to an end with Jessica, River has maintained a very private stance in the dating department. Because of this, it is believed that River Viiperi is currently single.